Triggerfish Animation Studios makes award-winning animated television and features, including Revolting Rhymes, Stick Man and Khumba. In the latter stages of making Netflix’ Seal Team, Co-Founder and Director, James Middleton concluded that it was time to update their storage and server infrastructure with a bespoke M&E-centric workflow fit for the high-bandwidth and high-performance demands of modern high-end animation.

“Triggerfish’ main animation studio is in Cape Town and over the last 12 years of business we have been building our technical infrastructure without using external consultants.

“Our hardware was largely Windows based with Windows storage servers. The architecture of our system had not evolved to keep up with our growing requirements.

“The available South African IT knowledge is largely from a banking rather than media perspective. The recommended solutions are fine, but they wouldn’t work for our use case because we have incredibly high storage demands with specific M&E requirements.

“On a recent 90-minute animated movie – Seal Team for Netflix – we were working off about 600 terabytes of storage, even though the actual files that leave our studio for post-production are only a few hundred gigs. The production window for an artist working on a movie like this is just over two years and it grows over a period of time with at peak about 140 artists and workstations and 20 people in support all within our building (although during the pandemic we had to have remote access to our machines).

“Even though Seal Team is 2K and 90 minutes long, the 600 terabytes amass from all of the component parts: all of the assets, all the versions of all of the assets, all of the scenes, all of the cache. The scene files themselves might only be gigabytes in size, but in turn they refer to textures and assets; every element, every lampshade, every character, every  costume, every skin texture, every set… Seal Team obviously involved a lot of water simulations and a huge amount of procedural data was produced. You need to retain a level of flexibility with every scene which might have 16 versions and we keep the last eight versions live.” 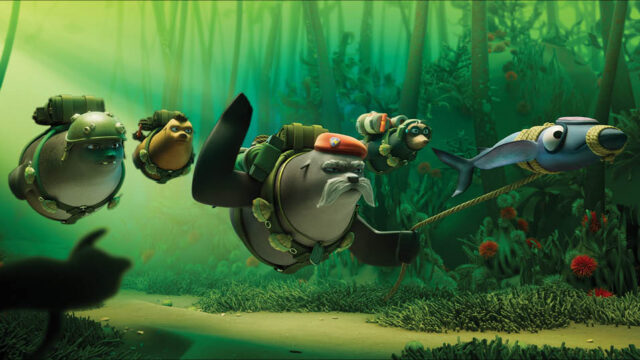 SWIMMING AGAINST THE TIDE

“The challenges come in the latter stages, the last eight months of the production, when you’re hammering the workstations and the render nodes very, very hard. (We have about 60 to 70 render nodes.) In creating the final renders of the scenes – and we will have multiple versions – you’re bringing together the foreground, background, each character separately, maybe vfx passes, maybe multiple vfx passes… This in turn was placing exceptional pressure on our active storage.

“At the time we had 570 terabytes of spinning disc and about 40 terabytes of solid state, but we didn’t have an automatic tiering system so we couldn’t tier between spinning disc and SSD. Even though our spinning discs were arranged in a way that gave us quite a lot of performance, we still hit bottlenecks when rendering. That’s when we had blockages and downtime. It was a combination of needing everything at once, with the limitation of having a non-automatically tiered solution. We had software processes that would define latest versions that would put them in an inappropriate folder, but it was never a seamless work around.

“We had this general sense that we should be able to do this a lot better and a lot easier.”

GO WITH THE FLOW

“We spoke to other companies in the industry and they recommended ERA. Coming from an M&E perspective they understood the issues. We discussed the challenges that we had with Sean Baker at ERA, like our need for scalable storage without rebuilding the entire system.

“Sean gives great confidence. In so many companies you have a friendly sales team who are probably not that technically versed and then you have a noncommunicative technical team. With Sean you’ve got somebody who is technically versed from direct M&E engineering experience; he understands the issues and can identify practical options and solutions.

“The solution ERA gave us was to replace all of our core infrastructure; new switches, new servers and storage arrays. We now have a new tiered storage solution with 100 terabytes of Seagate solid state and spinning disc as NAS.

“We’ve moved to the Tiger Store system, that sits on top of the service, we can work on block storage-based clients or NAS storage. We can choose what type of work case works with each and then we’ve got full redundancy. Tiger automatically tiers between tier one and tier two, based on date criteria and we can impose exceptions for some files that will never expire. It’s seamless.

“We can now move from Tier 2 spinning disc to Tier 1 SSD, literally with the click of a mouse. You have a flag that says, ‘look I’m here, but I’m not, and you can access me’. And you can pull it from the spinning disc in a few milliseconds enabling a constant flow. All of that is managed by Tiger Store and its almost unnoticeable for the artist.

“Investing in Seagate again was not in question. We had worked with Seagate drives within our previous system, so we knew Seagate has a robust support structure to address hardware failure; if there’s an RMA there’s a local agent and a reliable process.

“We’re a creative company, not a technology company and technology should be secondary process that just occurs and shouldn’t consume time. Storage should ideally be something that works seamlessly in the background. We want the artist to be able to focus on the creative. And for that to work, we just want things to function seamlessly under the hood.

“We now feel confident that we have that infrastructure.” 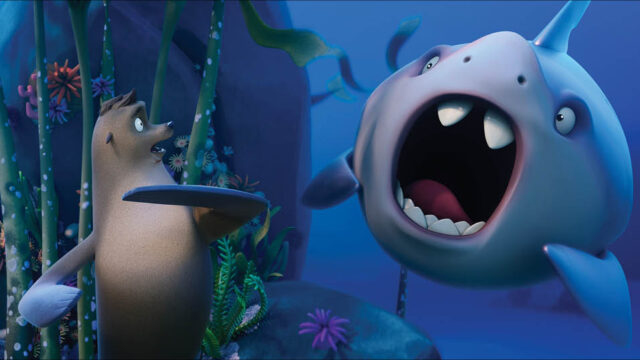 The 2021 Annecy International Animation Festival awarded Triggerfish the Mifa Animation Industry Award for “the pioneering role that the company has played in animation in South Africa, and Africa most widely.”

Based in Cape Town and Galway, the 25-year-old studio is currently producing three Africa-set TV series: Mama K’s Team 4 for Netflix; Kiya & The Kimoja Heroes for eOne, Disney Junior and Disney+; and the anthology Kizazi Moto: Generation Fire, for Disney+.

They also animated the Academy Award®-nominated Roald Dahl adaptation Revolting Rhymes as well as much-loved Julia Donaldson and Axel Scheffler adaptations such as the 2021 Annie Award winner The Snail and the Whale, 2020 International Emmy-winning Zog, the BAFTA-nominated and Annecy-winning Stick Man, and the Rose d’Or-winning The Highway Rat, all produced by Magic Light Pictures.

The studio is developing a diverse slate of film and television projects for most of the world’s biggest studios. Triggerfish also recently published their first graphic novel, Pearl of the Sea.

Integrity, Innovation, Inclusion. These three simple yet powerful words define our values here at Seagate. They inspire the level of excellence we work toward each and every day for our customers, business partners, shareholders, communities, and each other. They are the means by which we measure today’s aspirations. They lay the groundwork for tomorrow’s achievements. Together, they make a difference. And together, so do we.

Seagate is an innovative leader within the industry and in its 40-year history, has shipped over 3 Zettabytes of data. Seagate is working towards a frictionless future for data, with world-leading storage.

ERA delivers Workflow Solutions to help organisations deliver flexible, faster, and more efficient ways to address their ever-demanding project needs, whilst reducing costs. Providing dedicated support to help you make the most of your assets.

ERA is a platinum partner for Seagate Technology enabling us to work directly with Seagate’s enterprise division with full access to new developments, support, and training. With Seagate, we have the ability to build high-capacity SSD or SAS storage systems that are high density and high performance enabling clients to handle extreme data growth.