Marking the passing of the Disability Discrimination Act, Then Barbara Met Alan is based on the true story of the people behind a campaign of direct action that led to significant steps forward in the battle for disabled civil rights in Britain.

Produced by Dragonfly Film and TV Ltd and One Shoe Films, it is written by multiple Bafta winner Jack Thorne and award-winning actor-turned-writer Genevieve Barr.

The film tells the story through the eyes of Barbara Lisicki (Ruth Madeley) and Alan Holdsworth, two disabled cabaret performers who met at a gig in 1989 and would go on to become the driving force behind DAN – the Direct Action Network, whose coordinated protests pushed the campaign for disabled rights into the spotlight. 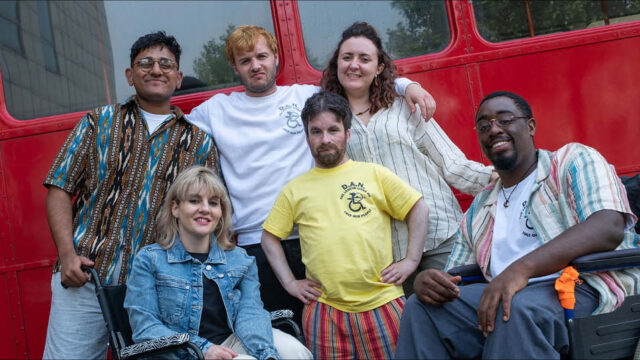 It was a very special moment to read what Jack and Genevieve had written. A script with the working title of ‘Piss on Pity’ is sure to grab attention and this was the first clue as to stylistically approach this work. Barbara and Alan used anger, humour and music as an energy to inspire and strike fear into anyone who should deny them their basic rights. They were lovers too – and arguably their love couldn’t survive the cause of bringing disability rights in line with other human rights.

Jack was adamant that “it needs to have a punk attitude”, so we set about making this as “in your face” as possible. We were to honour the activism of collection of disabled people who were intent on being provocative and definitely NOT pitied. The idea of collective action was inspiring but also daunting – how to show not one but three huge protest rallies on a factual drama budget?

Barbara is a formidable person in real life and the story is largely told from her point of view – so meeting her and understanding her was crucial and a little bit scary. When we introduced her to Ruth Madeley, who was to play her, we talked about was the importance of being comfortable playing a part and if it mattered that Ruth has a naturally Mancunian accent. But Barbara, in her North London drawl and piercing blue eyed stare, insisted “you’re an actor, aren’t you? You should do my accent!” and that was that. Off to the voice coach for Ruth. It was clear to us that we needed to not only capture the spirit of Barbara but also the voice and famous cackle.

We visited Barbara on a number of occasions with a whole art team who faithfully replicated the wonderfully flamboyant designs of Barbara’s bedroom with its leopard print duvet and lounge – noting carefully the sofa propped up on blocks to make sitting on it easier for a wheelchair user and the clear smooth floors with no lumps and bumps and doorways the correct width for wheelchairs. 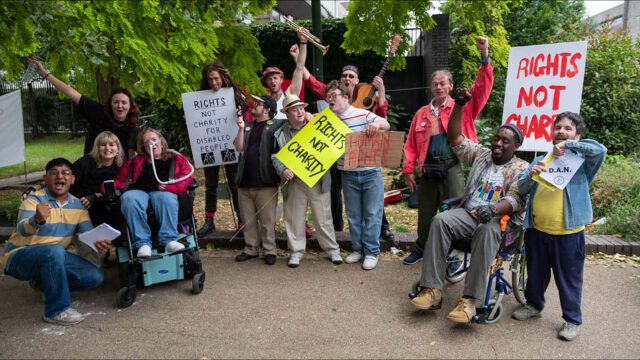 Then Barbara showed us her fantastic photo albums which inspired an idea to show not only the real Barbara and Alan growing up, but to mix it with the actors playing Barb and Alan too. This blending of fact and fiction was key to the success of this film as too often audiences can forget that these were real people in these really extreme situations. We had a brilliant archivist, Alex Cowan, who had an impressive knowledge of everything the activists did. We trawled the photos and video for elements we could faithfully reconstruct which then allowed us to cut from our own shot footage seamlessly to the archive and back again. This managed to capture the energy and style of the 90s. Plus it pleased the producers who were sweating at the thought of reconstructing a 11000-person demo in Westminster Bridge bringing traffic to a halt in 1995!

Shooting our ‘fake’ archive was a really interesting aspect of filming. The camera team, led by the very patient DOP Suzanne Salvati, had to source old VHS, BETA SP news cameras and a 16mm camera to shoot our own archive in essence. So, we made an early decision to treat all of the public scenes to the 4:3 ratio of the day (like news) and all of the private indoor moments to 16:9 on the Alexa. Our editor Chris Watson really had his work cut out to work with all these formats as well as the hours of real archive.

There were also so many brilliant black and white pictures taken by the great disability documentarian David Hevey. He had captured a shot of the young family – which our photographer copied brilliantly – and he also appears in the film as the interviewer of Mr Telethon Joe Simpson – a repeat of something he’d done over 20 years ago in pretty much the same place outside the now defunct LWT building.

Working with a co-director was an incredible experience and we encourage others to embrace the skills that different experiences of film making and life can bring to a project like this. Bruce was very determined to work with someone that had direct experience of working with deaf and disabled actors, and someone who could help build a new language and way of working. If you want to make work differently and embrace difference, it’s important to challenge the normative ways that drama is made.

The addition of Amit was crucial to working differently and to making the actors feel safe – that the myriad of needs are met, understood and worked with positively. Too often we don’t engage with working with disability talent because of the old excuses – oh it takes too long, we need to modify too much etc. We are able to accommodate the needs of being covid compliant in a matter of months – but it’s taken nearly 50 years to start to think about how to accommodate disabled talent. Yes, it takes more time and therefore more money – but TV is cash rich and don’t break a sweat at paying millions for a lead actor or a car chase. There are uplifts for filming in Scotland or Wales – why not for filming with disability is mind – sewn in.

Bruce has told stories to empower people from marginalised communities such as Anne (ITV Hub) and Murdered by my Father (BBC). Amit too with his CripTales (BBC) films and extensive work in theatre. Where we each had a gap in knowledge, we supported one another, and this shared working language impacted upon how we made Then Barbara Met Alan. 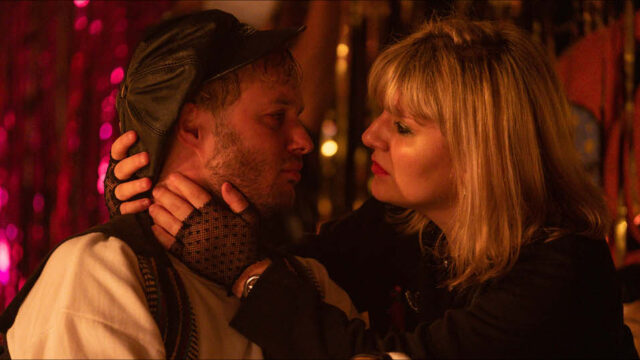 It was imperative to cast Deaf and disabled people from a diverse backgrounds too – a true reflection of campaigners then and now. There was anxiety that there may not be the standard of acting talent required, but Daniel Edwards casting accessed some impressive talent. As you might appreciate – given that TV drama isn’t massively representative of deaf and disabled people (1 in 4 if you didn’t know) – a lot of talent is ignored by agents. So, we launched a nationwide social media casting call and found a lot of incredibly skilled actors through nontraditional means. They were all expected to do a lot of homework as their preparation to understand the politics and language of the time should they be called on to improvise. Which they were of course!

Rehearsals were split in two ways and we began by working with Ruth and Arthur to get into the heart of their scenes. We also wanted to show the intimacy of their relationship as disability love making is never really shown on mainstream TV. It’s understandably complex and required delicate navigation for the actors. Ruth and Arthur were very determined to communicate what intimacy between two disabled people with differing impairments looked like – this was one of the most creatively exciting aspects of this shoot as lovemaking can be so objectified and romanticized in mainstream drama. With the help of some brilliant intimacy coaches, great lighting and a lot of laughs at all the paraphernalia, a new visual language to communicate something that isn’t normally explored was born. We hope it gives confidence to others to explore different ways of representing love and pain.

It was also super important to get the ensemble of the activist actors together as it gave us the opportunity to show some of the archive footage so that everyone was fully aware of what D.A.N (Direct Action Network) were about and what lengths they’d go to get their message across. It allowed us to have creative fun with anything access related and more importantly, for the team to bond.

Music and performance were instrumental as Barbara and Alan were both cabaret acts. We re-imagined Alan’s music and protest lyrics with the help of the brilliant Chaz Jankel of the Blockheads and co-writer of many Ian Dury’s hits. We also discovered in rehearsal that Arthur played the trumpet, so we weaved that in too. Arthur playing live with a majority- disabled band gave everyone goosebumps. People were genuinely cheering and dancing! It was important to communicate the ‘fuck you’ spirit of the day in the most entertaining ways possible. Too often political stories take themselves too seriously and we wanted to avoid ‘pity watching’ – because guess what? We ‘Piss on Pity’ – the DAN movement’s central theme which we wanted to reflect. The film is an ode to that spirit.

What united us both was the importance of telling a story like this to a wider audience for the first time. There are many aspects that have to be done differently. Some were mitigated for in advance – like wheelchair accessible dressing rooms, make up, costume etc. Some things you can’t plan in advance – like the crew using basic sign language to communicate on and off set. It’s easy to think that the barriers Deaf and disabled people face are physical. Those are the things that can be overcome (eventually!). The key barrier is attitudinal and having disabled people as director, writer and leads of a film shows that it can be done.