And while the pair had always envisaged a screen adaptation of the novel, it’s no surprise that it’s taken this long to make it to the screen.

The book tells the story of the birth of Satan’s son, the approaching apocalypse and the attempts by an angel and a demon to put a stop to it and preserve their comfortable lives on Earth. The action ranges across the globe and takes in miracles, destruction on a Biblical scale, the raising of Atlantis, alien invasions – budget lines to make any exec’s palms start to sweat. Doing the book justice on-screen back in the 90s would have cost the GDP of a small nation.

Screen adaptations have got close to the line before now. Terry Gilliam tried throughout the noughties to produce a movie version but the project fell short financially. Terry Jones and Gavin Scott were also reportedly writing a TV version in 2011 but again it foundered.

But by 2016, after receiving a posthumous letter from fellow writer Terry Pratchett urging him to go ahead with the project, it was announced that Neil Gaiman would write the scripts himself and act as showrunner with with BBC Studios, Narrativia and The Blank Corporation on board as co-producers.

Douglas Mackinnon, whose CV includes Doctor Who, Sherlock and Jekyll, was brought in as the sole director across the series. A big task for one person but, says Mackinnon, “myself and Neil recognised that one director was the best way to realise the script. The practicalities told us it was impossible for more than one director to do it. We’ve got very starry actors on very tight schedules so we had to fit in with them and we’ve got all these locations and CGI and so on. It was clear that however big a task it was, one director was key.”

The cast includes David Tennant, Michael Sheen and Jon Hamm among other big names and casting proved the relatively easy part of the production. “Normally you ask the casting director ‘can we get these people’ and you drop down from there but, actually, we just got all the people we asked for all the time.”

Mackinnon says “it’s the scale and ambition of it that’s the tricky bit” and points to the first page of the script that opens with “‘Exterior, Garden of Eden, Day.’ There’s a lot to fill in. The entire history of the world and its possible death.” And despite a “very good budget” the “director’s job is to stretch things.”

The first job though was to assemble his HoDs , a mixture of familiar faces and new. “As a director of a project of this size, the key is to make sure you’ve got the best people as your HoDs” and then give them the freedom to use their skills. “Part of my philosophy of directing is to let people express themselves when they get the ball. I wanted people to be bold with their decisions in every department. One of myself and Neil’s mantras was people should come to us with ideas and say “this might be insane but…”

But the overall tone had to be set by Mackinnon and Gaiman, because “it’s such an eclectic book. We fly through genres and we’re going from the very serious to the very comedic. The area we wanted Good Omens to inhabit was very close to being ridiculous but just on the edge. If you go too far you end up being a spoof show.”

The more “obvious” influences include Monty Python, Douglas Adams, PG Wodehouse (as well as Butch and Sundance for Tennant and Sheen’s characters). US show Legion was also a touch point.
Outside of film references the HoDs were given the avante garde jazz piano solo from Bowie’s Aladdin Sane  – “somehow, that got the spirit” – as did a picture of a single tile from an Istanbul mosque Mackinnon spotted in a documentary. “We used that as a colour palette reference.” 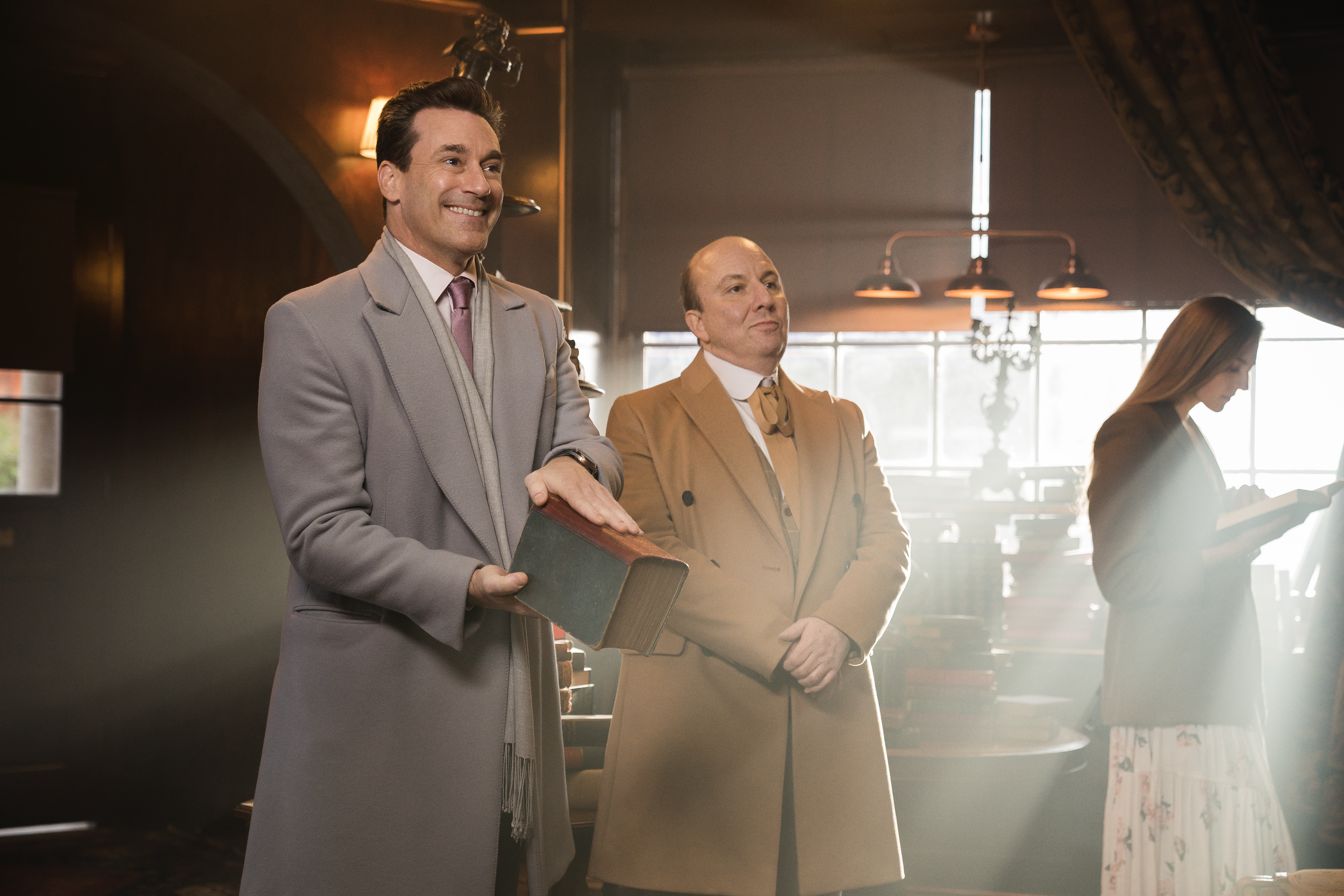 The target was “cinematic” and “a six-hour film rather than six hours of telly.” Mackinnon’s DoP Gavin Finney shot on Alexa SXT and Alexa Mini in ProRes 4444 (HQ) and 2.35:1 aspect ratio. Lenses included Leica Summilux primes and Alura zooms. “The package gave us flexibility to jump quickly between Steadicam, Technocrane and studio/dolly mode. Alexa gives very good green screen keys for vfx, and has great and flexible colour rendering which helped in the grade. The Alexa’s latitude could cope with the bright white sands of the Cape Town desert, very low-key hell scenes and everything in-between.”

Much of the look is also determined by the CGI. It’s necessarily a vfx heavy production with lead vendor Milk providing around 650 cgi shots covering the principal vfx sequences. But, says Mackinnon, the push was to make the vfx a seamless part of the narrative. “When I first did Doctor Who with Russell T Davies and David Tennant, the CGI shots were written into the script by Russell because they were so expensive. You would have five or six shots and that was your lot.” And that meant cgi had to be a showstopper. “What’s lovely now is you can move away from the clichés. You’re not just doing CGI shots for the exterior of a spaceship, CGI is involved throughout.”

For the two main characters, an angel and a demon, performing miracles is run of the mill and the vfx had to reflect that. Adam, the young boy who doesn’t know he is the antichrist, sees his imagination come to life. A cgi spaceship therefore had to be one that an 11-year-old would imagine, not the Death Star.

The vfx were extensive, says Milk’s vfx supervisor Jean-Claude Deguara. “You were pretty much doing a new effect for every vfx scene” which kept him busy on set advising throughout pretty much every shoot day. The vfx run the gamut of hellish creatures, explosions, water effects, a cracken, a speeding Bentley and the creation of one of the main locations, a Soho book shop that was scanned from a location on Berwick Street. But for all that, the thrust of the vfx was that they should fit in to the overall narrative, and not stand out as ‘moments’. “One of the first things that Neil ever said to me was he wants everything to feel like it’s all from the same place. It should all come together so everyone’s working together to harmonise the tone,” says Deguara.

But the vfx didn’t stop with Milk. The grade was with Gareth Spensley at Molinare and, says Mackinnon, much additional vfx occurred there. “There is a development now where a lot of the stuff that the vfx house would have done we now shift into the grade. The tech has caught up with us” allowing directors to sit in with a colourist to create many of the vfx that would have gone to the vfx vendor in the past. With the apocalypse approaching, the weather was a big part of the narrative and “80% of the skies we did with Gareth the colourist rather than Milk. A few years ago, Milk would have done that” but with more Flame plug ins now available in Baselight and other grading systems, the colourist can achieve more. “Neil calls Gareth a warlock because of the magic skills he appears to possess to change things,” says Mackinnon. 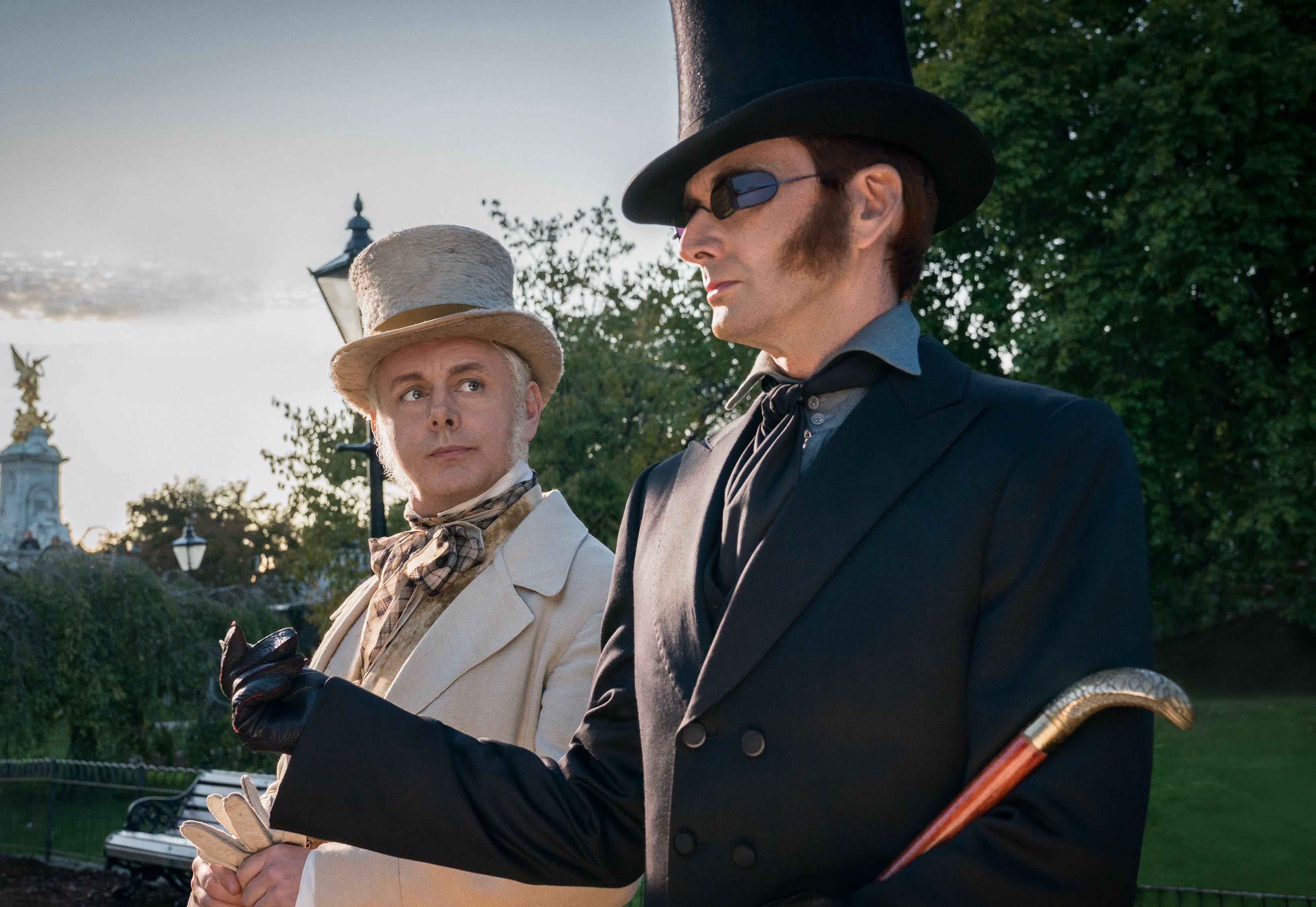 And the amount of vfx work achieved in the grade was new to Molinare’s Spensley: “The level we did it on Good Omens, that’s completely new for me. I don’t know of any episodic TV show that’s done it” to the same extent. “It could become visual effects but the reason it creeps into the grade is that if you break each shot down to visual effects then you would have hundreds and hundreds of vfx shots. And it becomes slightly unwieldy,” says Spensley. “Within the grade, we can probably get them faster and more cost effectively than if you break them into individual visual effects shots.” It also allows the director to sit in and make rough decisions in real time. “We can start something together in the Baselight and, if it’s the simpler end of things, they can reject it or proceed with it quite quickly,” says Spensley.

And with the original writer showrunning the production, and a ready-made fan base, that control becomes more important. “Five million people have bought the book already,” says Mackinnon. “Those fans will see a lovingly made version but also a bit more as well.”