Aerial filming lends a sense of scale and ambition to dramas. But it’s important to plan in advance if you want to maximise the potential of your aerial shoot. Tim Dams reports

Very few television dramas now are complete without an aerial sequence. Usually shot on a drone and sometimes on helicopter, the aerial sequences lend a sense of scale and grandeur, and help to locate the onscreen action.

Outlander, Vera, The Bodyguard, Killing Eve, Sherlock, Happy Valley, The Crown and Poldark have all booked in specialist Flying Pictures for their aerial shots, while Helicopter Film Services has provided aerials for series such as His Dark Materials and The Crown.

Drone shots are, in particular, so common “that there’s a bit of a backlash” against them now, says Helicopter Film Services CEO Jeremy Braben, who reckons the industry is in danger of overusing drones. Nearly every drama, he notes, now has a slow orbit drone shot over a house, or a vertical look down to follow a car.

“We often hear from productions that they don’t want an aerial to look like a drone shot – and that they want it to be a purposeful and developing creative aerial shot.”

Dramas tend to be more cost conscious than big budget movies, so drones are used more widely than helicopters. The one big difference between films and dramas, says Flying Pictures managing director Angus Benson-Blair is that films are sometimes prepared to use drones as crash cams. “Films are prepared to lose the drone to get the shot, which you won’t find on a drama by and large.”

In terms of cost, a day’s drone filming with a two person team and a back up aircraft will range from £2000 for a lightweight Inspire 2 drone, through to £6500 for a heavy lift drone that includes a camera like the Alexa Mini, a set of prime lenses, travel days and a larger team.

A helicopter plus gear starts around £8,000 for two hours, rising to a much higher sum if it flies for longer and carries a more complex camera array – which could include up to six Red Epics or Arri Minis.

However, competition is rife and prices can vary significantly – particularly in the drone market. “Directors need to be discerning about who they work with because there is an awful lot of dross out there – people who say they are amazing but who wouldn’t even know what 1st AD stood for,” says Benson-Blair.

Beyond cost, helicopters and drones have distinct pros and cons. “They are very complementary tools. Drones are good for slow and low, helicopters are good for high and fast,” explains Benson-Blair. Helicopters can fly long distances, and can be kitted out with any camera and lenses. Drones are limited in terms of the size of lens and cameras they can carry, and how far they can go. “But you can put a drone where you simply can’t go with a helicopter.  You can do shots that start inside and end up 400ft above ground.” 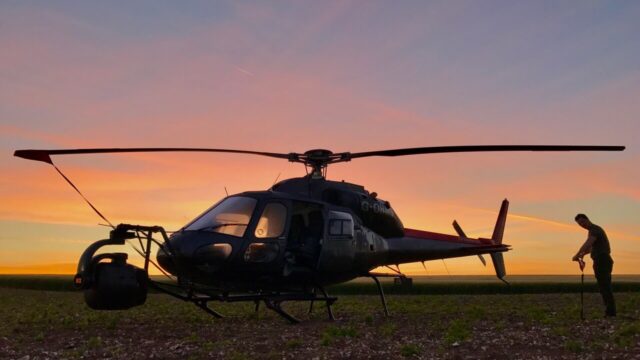 The choice of camera tends to be a key factor in determining what is used. “One or two drones can carry the big Alexa 65, but not many,” explains Braben. “And they come with their own set of rules and problems operating them.”

That said, full frame cameras can now be carried by drones. “We’re getting a lot of requests for the Arri LF Mini – which I have just bought – and it works with a drone,” says Braben. There’s still a reluctance to put high value lenses on drones though. “So we have a good compromise with the Zeiss CP3 full frame lens – which is a beautiful optic and very light.”

The weather is another key determinant in choosing a helicopter or a drone. “Wind is a big factor with drones, but not so much with helicopters,” says Braben. “If you want to guarantee they we can turn up at a location and fly, no matter what the weather apart from heavy rain, a helicopter is the way to go.”

“Drones are good for slow and low. Helicopters for high and fast” Angus Benson-Blair, Flying Pictures

Aerial shots that are to be used for VFX sequences also tend to need helicopters to carry the complex camera arrays needed. Shooting multiple locations in one day that are far from each other can also be done much more quickly with a helicopter.

Aerial specialists stress the importance of contacting them early so that permissions can be sorted. Benson-Blair says that, depending on location, permission for drone flying can be arranged for licenced operators in a matter of hours. Permission to fly a drone in London can take a week, however. The process can take a lot longer with a helicopter, though. “To fly a helicopter low over the Thames in London – try four months.”

“Talk to us sooner rather later,” advises Braben, who recommends involving aerial teams early in the creative process too, asking them to talk through what is and what isn’t possible during a shoot.

During the production itself, aerial operators require rehearsal time, stresses Benson-Blair, who believes that drones are massively misunderstood by production. “Very few realise how difficult it is to position a drone when you do have not depth perception. For every other tool out there, the operator tends to be right with the camera. But I might be 200 metres away from the camera.

“Everyone else gets rehearsal time. But often we are left till the last half hour of the day – and you’ve got to do one of the hardest technical shots of the day.”