“I thought it was un-adaptable,” says Julian Barnes, the author of the acclaimed novel Arthur & George, which forms the basis of a new three-part series for ITV, starring Martin Clunes.

Arthur & George is based on true events in the life of Sherlock Holmes, creator Sir Arthur Conan Doyle, in which he pursues a notorious miscarriage of justice.

Set in 1906, it follows Conan Doyle and his secretary Alfred ‘Woodie’ Wood as they investigate the case of George Edalji, a young Anglo-Indian solicitor who was imprisoned for allegedly mutilating animals and writing obscene letters.

Barnes, who won the Man Booker prize for his book The Sense of an Ending, thinks Arthur & George has a fictional structure that “couldn’t possibly hold together over three episodes.”

So it comes as little surprise to find that ITV’s adaptation is substantially different from the book. The original novel focused heavily on the early lives of the protagonists and spends alternative chapters with Arthur and George before their stories finally intertwine far into the novel. There are also long passages devoted to Conan Doyle’s interest in spiritualism.

At a press screening last month, the talk centred on how the producers had successfully managed to adapt a highbrow book – whose most obvious home might be BBC2 – for commercial broadcaster ITV’s broad audience.

It’s also an adaptation that Barnes approves of. He sounds relaxed about the changes, noting that TV is a different art form from the novel. Narratives have to be rationalised to fit the visual medium of TV, he says. ITV director of drama Steve Novemberdescribes the series as “a complex, character-driven mystery treat” – which “proves the BBC doesn’t have a monopoly on proper books”.

Producer Philippa Braithwaite read the book soon after it was published in 2005. But it took her several years to option, and when she finally succeeded she took it straight to ITV – because it is the home of Doc Martin, which she produces with her husband Martin Clunes through their indie Buffalo Pictures. She contacted script writer Ed Whitmore (Silent Witness, Waking the Dead), who she thought would suit the project because of his crime writing background. 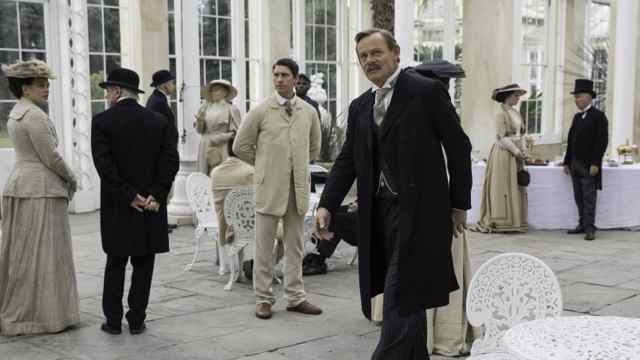 “Firstly we did quite a literal adaptation of the book. We followed the line of the book and we did a George and an Arthur.” But ITV felt it didn’t work –it wasn’t visual or exciting enough.

Says Whitmore: “So we went back to the drawing board.” He then concentrated on events in the latter part of the book when Arthur and George come together, and Arthur takes up George’s case and decides he is going to try to clear his name. Arthur’s secretary Alfred Wood is also given a prominent role as his investigating sidekick – bringing a buddy movie element to the script. “They are a fun pair and almost comic – they are two guys you want to hang out with,” says Whitmore.

Whitmore also begins the story shortly after the death of Conan Doyle’s first wife, when Doyle is wracked with guilt for having had a mistress during her illness and feels unable to write another Sherlock Holmes story. “Once we decided we would take a more radical, re-conceptualising approach to the book, that felt like the jumping off point. Here’s this man who is paralysed by all these things in his personal life who takes up this case, this challenge.”

When Arthur & George was finally commissioned, Braithwaite put the script in front of Clunes. “A few people have asked me if it was written as a vehicle for Martin. It wasn’t. The part existed through the book and it’s a real person, but it was great that he wanted to do it.” Still, Clunes admits to feeling nervous about taking on the role, and particularly about putting on a Scottish accent.  “If it hadn’t been my own wife doing it, I would have probably done a runner. But I didn’t want to lose face,” he says.

Braithwaite tapped into the drama tax credit and gap financing to bolster the ITV budget. “The tax credit helped enormously,” she says. “We couldn’t have done with out it.”

Indeed, the series makes use of extensive locations – including Trafalgar Square, Somerset House and St Pancras in London and the Black Country Museum in the West Midlands – which are all rendered in period style to lend a sense of place and atmosphere from the early 1900s.

Director Stuart Orme (Foyle’s War), oversaw the eight-week shoot. Shooting on the Arri Alexa, he has used the camera’s ability to shoot in low light to play up the sense of light and shade in the drama. Even though Arthur & George is essentially a dark story, Orme says it was “clear we needed lighter moments – and a lightness of touch”.

Braithwaite says if Arthur & George is successful she’d like to bring more of their stories to the screen. “The one thing I hadn’t really realised was how much it was going to become about Arthur and Woodie. The chemistry of those two has really worked.”