One of the biggest aerial filming contracts this year is UK-based Aerial Camera System’s (ACS) work on the UEFA EURO 2016 football tournament, which kicks off across France this summer.

UEFA’s brief for the Euro Media Group-owned specialist camera company was to enhance their additional programming offering for rights-holding broadcasters with high quality aerials of the nine host cities across France, shooting their iconic features, unique architecture and the ten stadiums where the football action will take place.

These were and are being shot using a combination of helicopters and drones.

“We tried to shoot all the cities at the same time of day to match the natural light as much as possible,” explains Aerial Camera Systems’ Matt Coyde, who adds that the helicopter team included the highly experienced Robin Deacon, a camera operator and from Belgium, the pilot Philippe Martin . 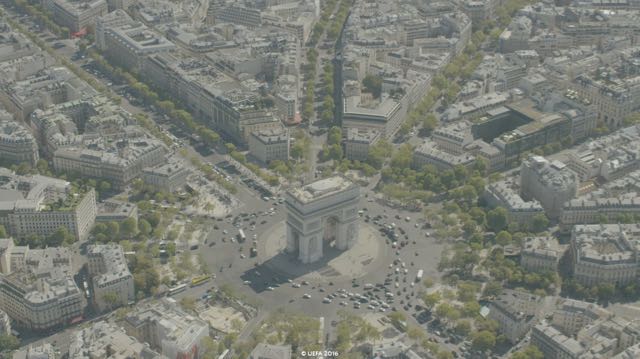 “We only use very experienced camera operators and filming pilots for these projects – because it’s safer, and safety is always paramount. But also because helicopters are expensive with flying time charged by the hour so the more experienced the team the more cost effectively you can achieve the shots you need.”

The aerials were shot in 4K, with the set up pairing a RED Dragon camera with a powerful Canon 30-300mm zoom lens housed in a Cineflex Ultra gimbal in the nose of the helicopter, recording to 512GB RED Rocket cards – enough for around an hours shooting at 4K resolution. 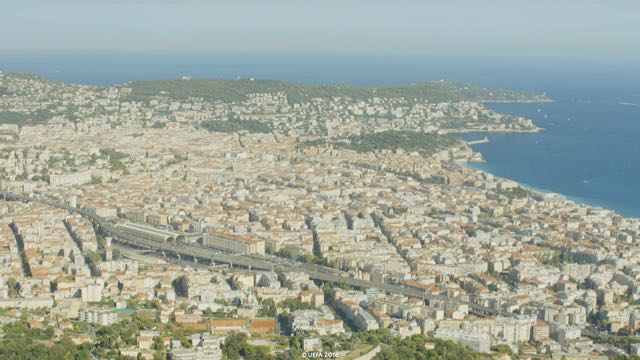 “The secret of successful aerials is having a clear idea of what you are going to do before you get up in the air,” says Coyde. “The camera operator and pilot have to work very much as a team – as if they are joined at the hip.”

An important part of the brief were low level tracking shots of the stadia which couldn’t be achieved with helicopters or jibs, so a DJI Inspire drone with integral 4K camera was used – with UAV and drone pilot supplied by French company Flying Eye with camera operation by Robin Deacon, David Manton and Chris Homer from ACS. ­

The output was graded and stabilised to match the RED footage as close as possible, but Coyde warns that drone shooting in France involves plenty of red tape, even with the assistance of local Parisian production company Fighting Fish to facilitate the ground permissions and logistics. 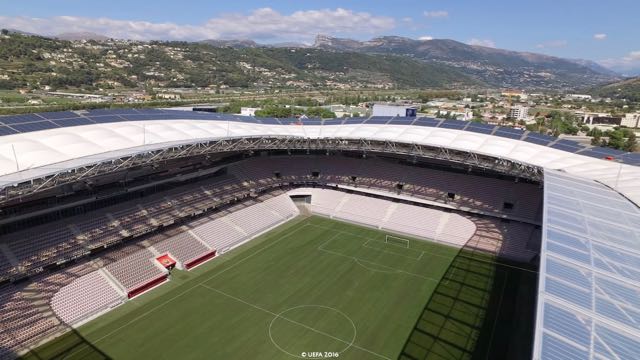 “Drone shooting was much more complicated because of the lengthy approvals process. We needed shooting permits from local government, the Mayor’s office and as well as aviation authority approvals, plus police co-ordination to cordon off streets to allow shooting down specific roads, which included hiring teams of stewards to exclude the public in busy locations across all the cities but particularly in Paris.”

“Shooting with drones in urban area in particular is getting more difficult,” declares Coyde. “In France its partly because of tighter security following the recent Paris attacks, but also because lots of hobbyists now have drones. The authorities need to check that they are going to be operated properly. In some locations they are banned completely.” 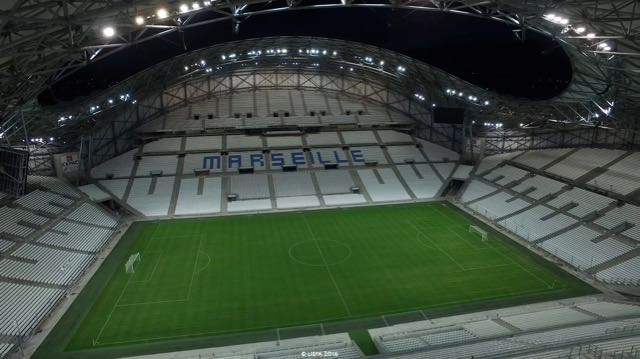 Although UAVs allow you to film low level aerials, they also have their drawbacks: primarily short flight times and restricted camera options because of limited payloads.
Coyde concludes: “At ACS we operate UAV shoots with as much attention to safety as helicopter shooting. We make sure that our pilots fly well within the recommended flight time – running sorties of around 10 minutes with the DJI Inspire.”