The UK commissioning market is ‘healthy’ and ‘supports small producers’, according to Pact’s 2017 Census.

The Census, published today, reports that the BBC spent the most with smaller producers in 2016 with 38% of its commissioning budget going to indies with a turnover of less than £10m. By contrast, 29% of the BBC’s budget was spent with producers with over £70m in revenues.

ITV and Channel 5 spent the most with larger producers. Pact said the prominence of prime-time entertainment formats on ITV and C5 (such as The X Factor and Lip Sync Battle) leads them to working proportionately more with larger producers – ITV spent 57% of its commissioning budget with producers with a turnover of more than £70m, and C5 spent 56%. 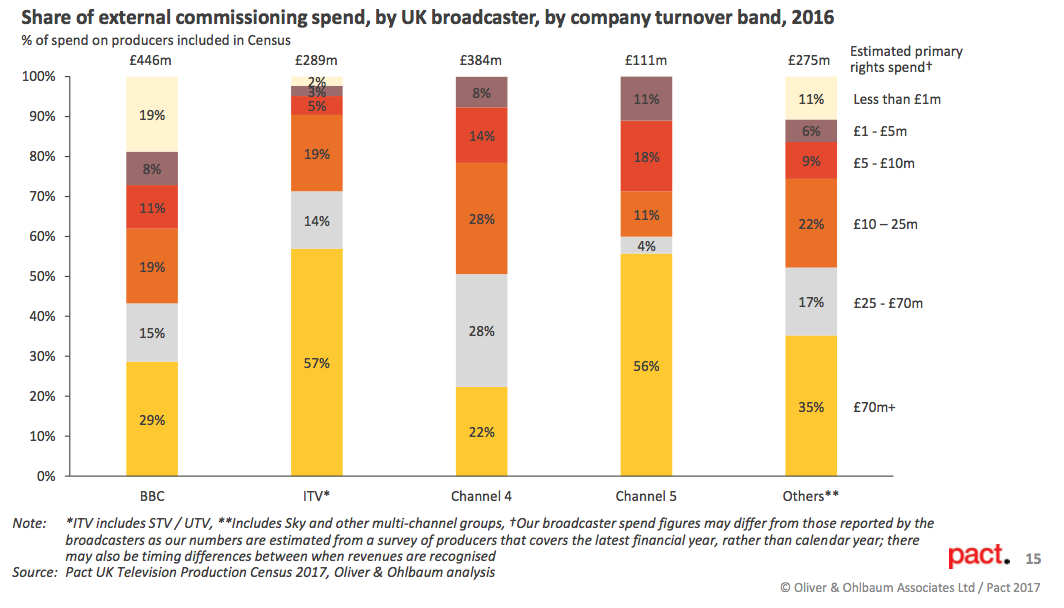 Pact chief executive John McVay said the figures proved indies operated in a ‘pretty healthy market’ and that, contrary to the belief of many commentators, the big companies have not squeezed out smaller indies.

McVay said: “Other than ITV, which historically has always been a hard place to get in if you are a start up or small business, I don’t see any evidence… that there is a move to conglomerate groups taking the vast bulk of business.”

McVay said 70-80 indie companies start up each year, and that “they wouldn’t be doing that if they thought there was no opportunity.”

McVay said there are around 450-480 indie TV companies operating in the UK market.

The BBC has shortlisted seven cities in the running to be Host City for the 67th Eurovision Song Contest in 2023. The BBC had expressions of interest from 20 cities, across all four Nations of the UK. >>>

The Shoot12.08.22
Grantchester returns to ITV, Masterpiece for S8

Crime drama Grantchester is to return for an eighth season on ITV and MASTERPIECE PBS in the US. Filming for the show produced by Kudos has started, with Robson Green returning as DI Geordie Keating and Tom Brittney as Reverend >>>
Prev Post
Next Post
This website uses cookies to improve your experience. We'll assume you're ok with this. I've read this
Privacy & Cookies Policy